I'm so ready to be away. It has been a very long time since I've gotten to see My Sean & his girls. They have sent me the ticket to fly up and spend two weeks with them.
Getting everything ready to leave in the care of Himself has been a stretch. I have had to make a great many lists for him, and I abhor making lists for others.
My Sean and the girls have sent an itinerary that would make a weaker granny shudder. Two whole weeks on the move every minute, with lots of travel, luggage, people I haven't yet met, places I've never been before. YeeHaa, bring it on.
Posted by Brig at 9:42 PM 11 comments:

Having escaped the house corral, she snuck into the garden. Ah, the smell of grass and pine and dirt. I'll just check on the ol hens, thought she. Navigating thru the veggies, she spied a lovely bit of lettuce, munch, munch. Humm, on to the spring onions, just a few. Swooning thru the Italian parsley on she went. These little carrots are mighty tasty. A few nasturtium leaves will add the pepper. Onward with a pinch of thyme. A handful of sugar snow peas, well maybe just a few more. Munch, munch, those Swiss chards are fine. A glint of red, the strawberries oh my, berry delicious. Having gathered the eggs, she returned to the house corral to tell Himself that she didn't really want much dinner, and those darn ol hens are eating us out of home and hearth.
Posted by Brig at 5:02 AM 9 comments:

It is with a great deal of sadness that I post this missive. There have been three, yes I said 3, deaths in cowcamp during the past week.
Now it may not be of concern to others but to the Cowman & I it is heart breaking.

First to go was the guy that we depend on to provide air movement in the house, Cecil ceiling fan. After a thorough autopsy, we still don't know what was the cause of his demise. He was so young. While we were still reeling from his passing, the heart of Fred the freezer flat lined. He was elderly, and had a good long life, but still it was hard to see him go. Having shed all our thawed tears, we sat down at the picnic table in the backyard to make all the arrangements. Just then with a small burp, a low rumble, and a big belch of smoke Walter water heater told us that we had to shut off his gas supply and extinguish his flame. He was history.
We have combined the services for those who have to travel to attend. Those wishing to contribute to the memorial fund set up in their honor can send them c/o Cowcamp. Donations are currently not tax deductible as cowcamp is not considered a non-profit. We will be appealing our status, sure looks non-profit from here.
Posted by Brig at 1:17 PM 14 comments:

That time of year... 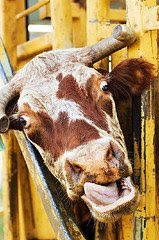 My doc says I'm way past due, and I have now been scheduled for a pap test and mammogram. You can see by my picture from the last time I had these tests, how I feel about it.