The home ranch had a far 2,000 acre field called the Mattea, it consisted of a lot of ridges and draws.  It was good feed but a tough gather, as the trap (holding field) in the corner ran opposite all those ridges and draws. And once you were in the holding field you were still a long way from the home corrals.

You had to be saddled and on your way long before daylight, and trail an extra horse as well to cover that country.  When you finally got the cattle trailed back to the home corrals, you had spent more than a few very long days in the saddle. It was hard on cattle, dogs, horses, and cowhands.

Then the light dawned for the Cowman...we can gather it with a helicopter...! He penciled it out every which way, and it did work, at least on paper.  Off to the Captain (his dad) he went, after a protracted discussion, he was given the go ahead.
Then to find a pilot willing to take on this little job...eventual he did find a pilot that was pretty hard up and had done one small gather...so the sucker, err, pilot signed on. 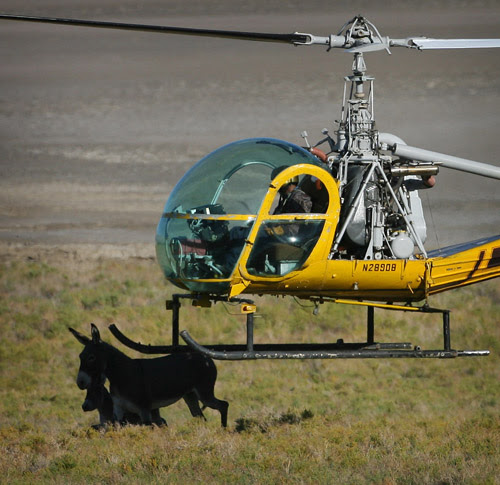 not my photo...not my burros..

I love to go up in whirly birds, and don't understand what is so upsetting about hanging out with one foot on the skid so I can get the full thrill. But the Cowman was not about to let me go up for this gather.  Truth be told he knew that field like the back of his hand, so it was he who got to direct things from the air. Dang, I love flying in those things.

We rode out early a horseback to meet them at the holding field. By the time we got the gates set they were driving in the cattle.  whomp, whomp, whomp...
Don't you just love the sound of whirly birds?!!

Everything went well, except the next time we gathered that field with a helicopter, we had to go a might farther afield to find a pilot that was that hard up...I mean that experienced in gathering cattle.
Posted by Brig at 7:20 PM 5 comments:

My oldest grandson has recently received notification of the selection of three of his pictures...  You can see them and read about it here:

Thanks Brigid for posting this...we all know how photo posting challenged Cody's grandma is!