Went up to Longview to meet up with a friend and her Dad.  We took a drive around the area, and there were lots of stories told.  They took me to get a first hand view of the famous Nutty Narrows Bridge.  I was intrigued and did a little research when I got home.  Here is the story of how the Nutty Narrows Bridge came to be:
by the Department of Archaeology & Historic Preservation, WA gov

Nutty Narrows Bridge, Dedicated to the Safe Passage of Squirrels, has been added to the NRHP!


The Nutty Narrows Bridge that was erected to create a safe, above-street crossing for the City of Longview squirrels has been listed to the National Register of Historic Places.  When constructed in 1963, the bridge received world-wide attention and was featured in Sports Illustrated, the Christian Science Monitor and the London Daily Press. The Bridge is a small-sized catenary bridge that allowed squirrels to move between the Park Plaza office building and a city park across the street. The bridge is the oldest known squirrel bridge in the United States. Envisioned by the owner of a construction company, Amos J. Peters, the Nutty Narrows squirrel bridge was constructed in March of 1963 and reflects a modern design aesthetic combined with the do-it-yourself style of Amos J. Peters. 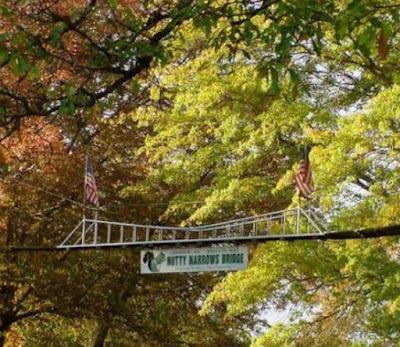 Amos Peters, the bridge’s designer and builder, discovered the need for the bridge when he noticed a red squirrel in the road in front of his office building that had met a vehicular demise. Peters collected the remains of the dead squirrel and carried it home to show his three children.  After some months in the family freezer, the children, unbeknownst to Peters, pooled their allowance money and took the frozen squirrel to a taxidermist for preservation. It was their 1963 Christmas gift to their father. This stuffed squirrel, the inspiration for the Nutty Narrows Bridge, is on display at the office of the Amos Peters Construction Company to this day. 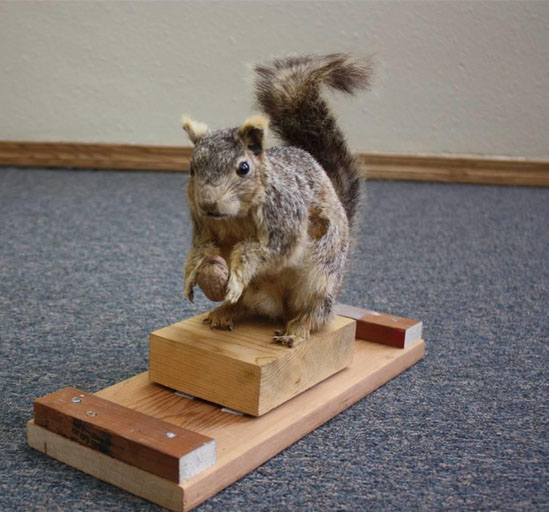 Peters first kept the idea of building a squirrel bridge to himself because he believed others would think he was a “nut.”  However, after Peters mentioned the idea of the squirrel bridge to insurance man Win Jones, another tenant of the Park Plaza building, “things moved rapidly.”  With agreement from Frank Willis, the Longview Parks Department superintendent, on February 28, 1963, Peters presented the idea to the Longview City Council. Before finalizing the design, Peters consulted with architect Robert Newhall and civil engineer Donald Kramer, as directed by the City Council.  LeRoy Dahl, an employee of Newhall, participated in finalizing the design. All of the Nutty Narrows engineering and architectural service providers had offices in the Park Plaza office building. Peters promised the “entire initial cost … together with its future maintenance [would] be financed by Park Plaza.” With approval from the “City department heads,” the City Council unanimously passed a motion to accept the offer. At this same meeting, councilwoman Mrs. P. H. LaRiviere, Sr., was reported to have “facetiously suggested the name ‘Nutty Narrows’,” and thus it has been known as such ever since. This was likely a reference to the Tacoma Narrows Bridge, famous for its 1940 collapse in Tacoma, Washington. Within two days of the council’s decision, news of a squirrel bridge had spread across the United States. Peters then reported that because of all the national attention, the bridge’s design “would have to be slightly more elaborate” than originally planned. After “three or four nights at [his] drawing board” Peters completed the plans for the bridge. 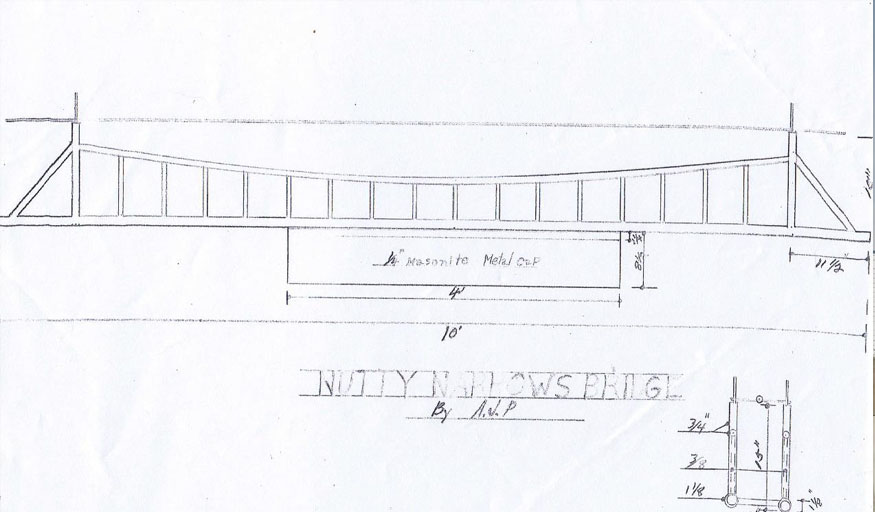 With a design in hand, Peters along with William J. Hutch, his brother-in-law and co-owner of the Amos J. Peters Construction Company, built the bridge in the company’s workshop at a cost of about $1,000. On March 30, 1963, the bridge was unveiled at a grand dedication ceremony, complete with marching bands.  A temporary platform for dignitaries to speak was also constructed at the site of the bridge. The Longview Police closed the street to traffic and the 60-foot-long bridge was hung over Olympia Way.  The Kelso Chamber of Commerce sent several representatives with a large box of peanuts labeled “Kelso Nuts for Longview Squirrels.” Chief of the State Patrol, Roy A. Betlach (who was representing Governor Albert Rosellini), “was lifted 20 feet above the crowd in a park department cherry picker personnel crane and snipped the bright blue ribbon dedicating what he had earlier called the ‘road for rodents’.” Reports of the dedication of the bridge spread far and wide. Articles appeared in newspaper such as the Denver Catholic Register, the London Daily Express; the News-Sentinel of Fort Wayne, Indiana; the Alexandria Gazette of Virginia; and The Daily at Des Moines, Iowa.” Even the Christian Science Monitor and Sports Illustrated Magazine. 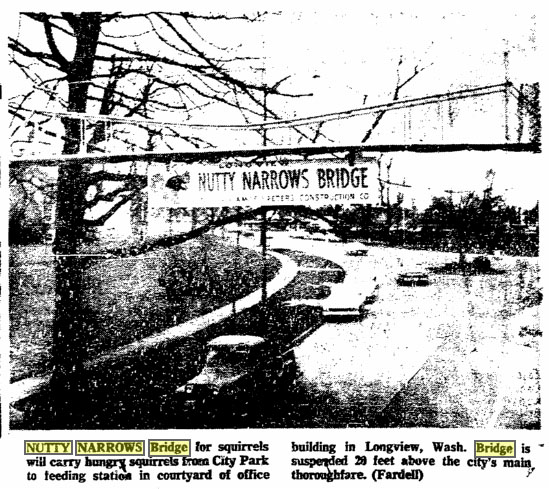 Nutty Narrows Media Coverage, Oregonian- March 20, 1963
Over the years local businessmen have used the bridge and squirrels to promote their businesses in a tongue-in-cheek way.  A civic boaster group, called the Sandbaggers, even staged a campaign to import squirrels when the population dwindled over the harsh winter of 1968-69. Over the years, students, writers, and individuals of all ages who loved animals contacted Peters about the bridge. Peters was appreciative of the letters and personally answered each one, until they became so numerous that it became a burden. At that point, a year after the Nutty Narrows Bridge had been erected, he began responding with a form letter.  Today, members of the Peters family, the City of Longview, and the Sandbaggers carry on the fun and the tradition of making safe travel for squirrels.  In fact such efforts have spawned the construction of several additional squirrel bridges in the city. Over the years the bridge has been taken down a several times for repairs and has been moved four times due to the failure of the attached structural supports.  In 2010 it was reinstalled near it original location.  The Sandbaggers, once again in true form, held a “tongue-in-cheek” ceremony before convening at the Monticello Hotel for cake and squirrel-themed cocktails. The ceremony included “speeches, a prayer, cheerleaders, a ribbon cutting and a release of doves.” The Nutty Narrows Bridge is unique. While there have been other squirrel bridges proposed, only a handful of cities are known to have constructed them, and except for the new squirrel bridges built in Longview, none of these were in the United States. Over the years, the Nutty Narrows Bridge has been taken on almost legendary status.  It is listed in multiple tourist guides as a “must see” in Longview and has been listed on RoadsideAmerica.com, an online “Guide to Offbeat Tourist Attractions” as “worth a detour.” Postcards and shirts with a local artist’s design were made available for several years. While not the initial intent of the Nutty Narrows Bridge, its value as a means to promote the City of Longview has long been acknowledged. Today, the legacy of the Nutty Narrows bridge is embodied in the annual Squirrel Fest, a celebration of squirrels, was introduced by the Sandbaggers in August of 2011.  Since then three other squirrel bridges have been erected with plans for more. The nominated object itself consists of a symmetrical catenary bridge with a flattened canvas fire hose deck, and a 10’ long mock suspension structure at its center. It is approximately 60 feet in length.  The bridge structure was made from aluminum tubing, part of which was old TV antenna.

I've been getting the spare bedroom ready so I can paint it.  I replaced the funky plastic chandelier with a normal ceiling fixture.  Got a "real" ladder at the hardware store, so no more balancing on a chair for me.  It only took 40 trips up and down stairs to find which breaker controlled the ceiling lights. Good exercise.  Next I'll remove all the miscellaneous nails, putty the numerous holes, build shelves in the closet, add a closet door and trim. Then paint! After that all it will need is a bed.

Nate (my Tahoe) needs to have the interior air filter changed.  Called the dealer, for a fortune they will do it.  No thanks, a few pennies for a T-10 star bit, and a new filter, and I can do it myself.

"In the heart of Oregon, Mount Angel's Oktoberfest brings 350,000 people to the Bavarian village every September. The Northwest's oldest and best loved Folk Festival, celebrates the fruits of the harvest, and the goodness of Creation! There is something for everyone at the Mount Angel Oktoberfest." 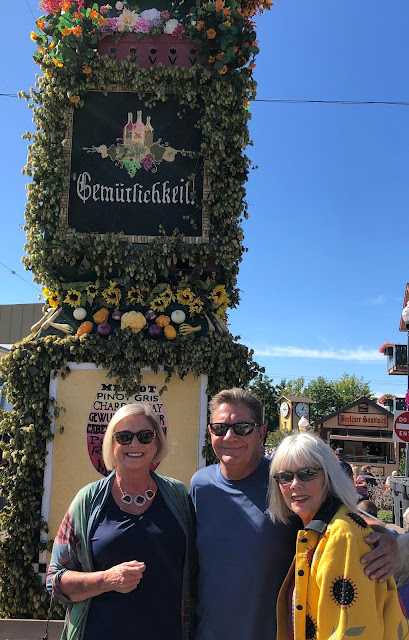 My BIL & SIL & I went on Thursday, and spent the whole day.  Beautiful weather, friendly people, wonderful food, and beer. What more could one want. 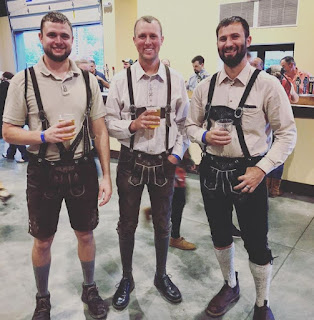 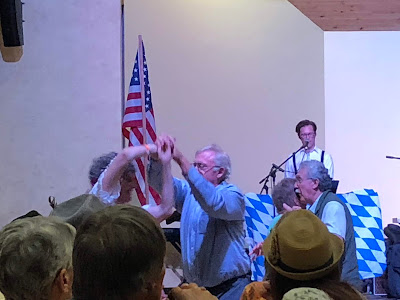 Singing about beer, with beer... 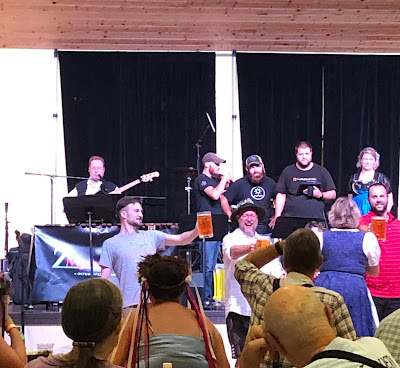 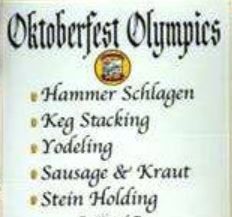 The annual photo, without beer... 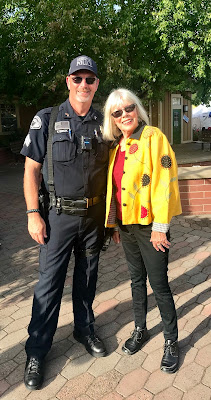 As we started to walk back to the car I caught sight of this elevator over watching the events. 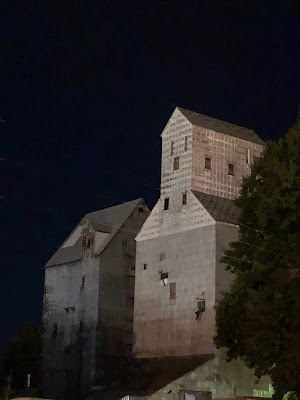 Preceded by loud Thunder Boomers and a light show, a little ol' cloud came over the hovel yesterday...

According to the ones that know these things, we got 3 inches in less than 30 minutes.  I don't have to irrigate for a few days.  Love the PNW!
Posted by Brig at 9:27 AM 22 comments: Links to this post 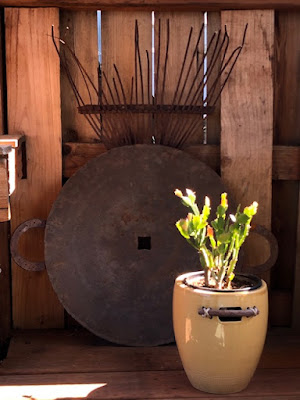 Cluck:
While I was recovering from my eye surgeries at my SIL & BIL's in RB, one of their laying hens took a liking to me. I couldn't do much, so I spent considerable time on the wooden bench up by the fire pit.  It was funny to see "Olive Oyl" come running when she saw me there.  She would jump up on the bench, get as close to me as she could, and just kinda settle in to let me know she was happy to keep me company.

She's never been a beauty, but she sure has enough personality to make up for it.   My SIL kindly keeps me updated on how she is getting along. She is doing well, and still laying.

There appears to be a bit of identity confusion with Willie.  While taking him to the dog park the other day, I was talking to him. (He gets nervous about riding in a vehicle)  Inadvertently I called him Cowboy, and he perked right up, and quit whining.  Didn't really think that much about it til we got to the dog park. After he was in the fenced area and off leash, I called him back and he ignored me. I called him back several more times with no response.  Remembering the time in the SUV, I called him with "Cowboy".  He was back at my side in a flash.  He has kept up the only answer to "Cowboy" ever since.  "Cowboy Willie" is the long version.  The vet is going to think I'm a nut if I change all his paper work. 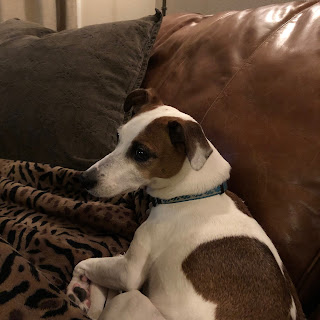