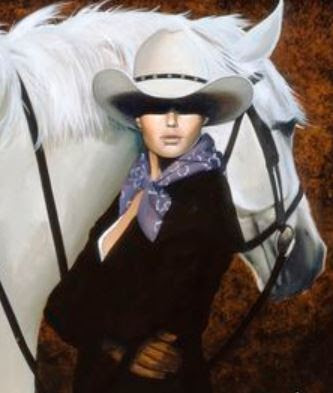 Geez, I seriously don't know how you right handed people do it.
This learning to be slightly ambidextrous is a challenge. I do shoot right handed, thank goodness, but can't figure out how to rack the slide on the Sig. I can surely use this as a valid excuse for getting a wheel gun.

There are things that need to be done/fixed around here before it starts in to storming later this week. The gutters need cleaned out, the leaves from the oaks need to be blown out of the borders, and the BB shot? window in the side door to the garage needs to be replaced. 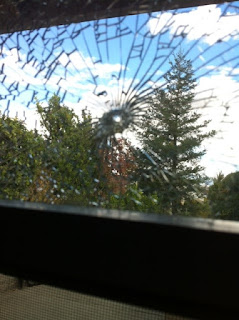 The fellow I had come to look at the window, said I would most likely have to replace the whole window unit as they are put together in such a manner that you can't just replace the glass. I could do this if it weren't for this dang bum arm/wrist.

No interest being shown in the house, and I don't know what I can do to change that given the market in this price range. The neighbor's house has had no interest shown in it, either. 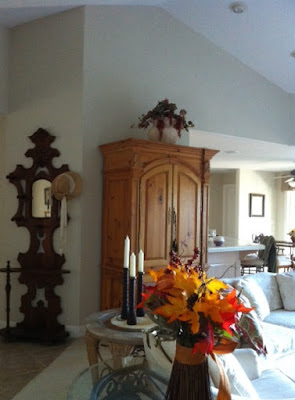 My brother is asking the estate attorney for detailed accounting's of every little expenditure, and a host of other things. I have tried to provide it all (via the attorney) in a timely fashion, apparently that is not good enough. It will be nice when this is behind me.

Fall is slow in coming here this year. Most of the garden is confused with all the weather swings. The neighborhood trees are just starting to turn color. 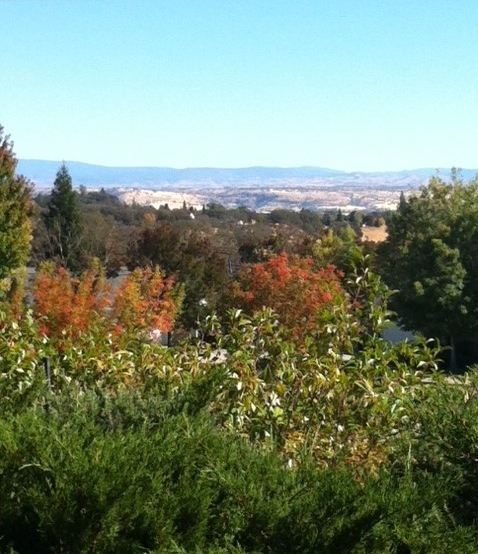 My confused tomato, that had one tomato all summer, has recently put on a bunch of tomatoes. That's fine, I can make chow-chow with them. 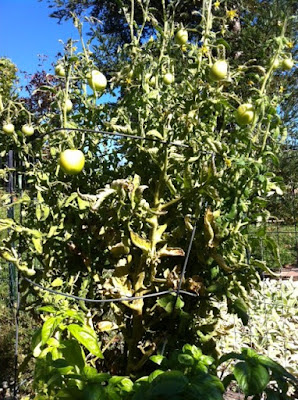 The fig tree is producing a bumper crop. 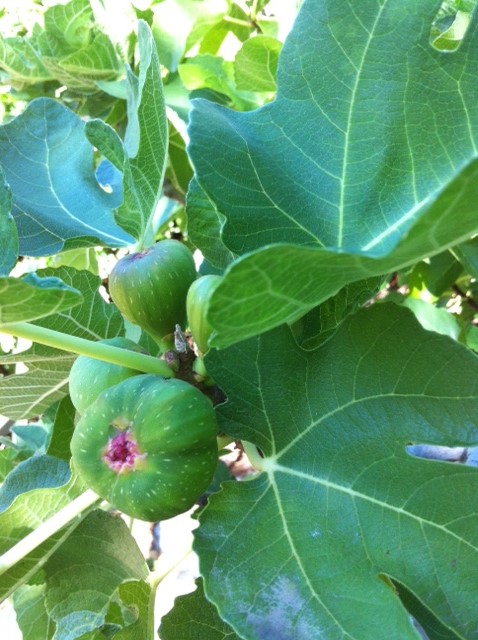 The only things on schedule are the pomegranates. 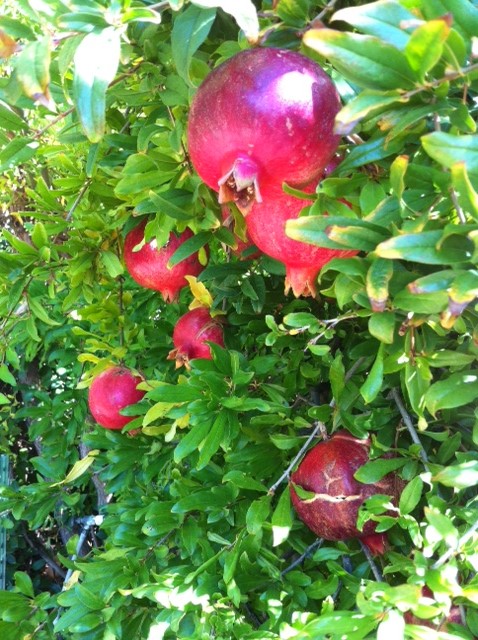 ***
One of the joys of living in a small town, my neighbors all know about the Angel debacle. They seem to think that my recovery will be sped up by bringing me home cooking. I may not know much but I know they are all way better cooks than I, so I'm accepting their tasty offerings with humble gratitude.
Posted by Brig at 5:45 PM 18 comments: 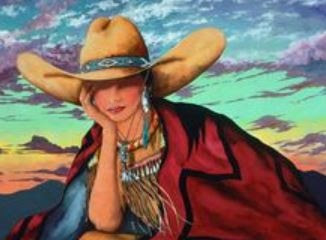 My girlfriend said, "They come in threes, was this the second or the third?"

Such was our conversation as she and her boyfriend were driving me home from the ER Saturday evening.

While up town, looking for a base to put my MIL's angel on, the angel and I took an unintended & darn poorly executed hard landing.

I seem to be a slow learner, but I got the hint this time. There will be no more angels placed on my mother-in-law's grave.

Five stitches, four steri strips, assorted colorful markings.  Pain meds are on board. Going to take a bit to heal up.
Posted by Brig at 12:49 AM 35 comments: 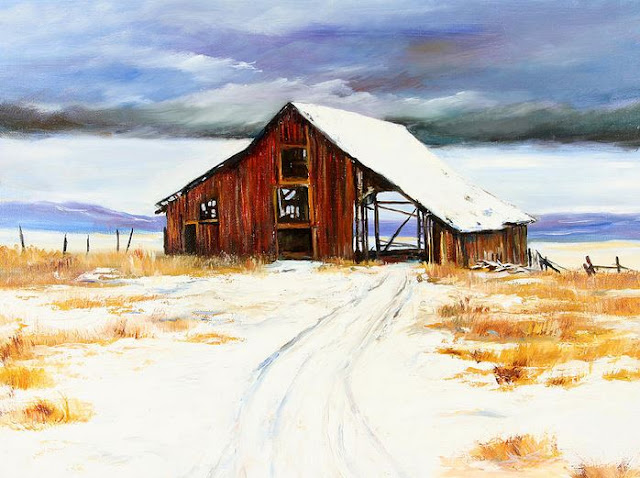 There was a time when the Cowman went to back of beyond Nevada to process some cows that the ranch had bought.  I helped jump his ponies in the gooseneck, packed his foul weather gear, tucked a few surprises in his duffle, made sure he had plenty of preg sleeves, and a big thermos of hot coffee, and waved him off.

He got over there and found a mixed bunch of wild high desert cows.  Mean as hell every last one of them. The Cowman had decided to preg the cows, so only the bred ones would be shipped to the home ranch here in Cali. The open cows and toothless wonders were going to the auction yard. 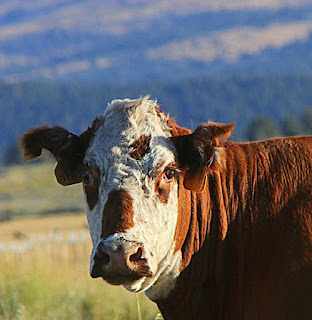 The Cowman was to do the preg testing.  If you haven't stuck you're arm all the way up the tight ass of a wild cow in a snow storm with a cold wind nipping at your nose, you don't know what your miss'n.

The Cowman was bundled up pretty good against the cold, well except for that one arm. Anyway, one ol gal took offense to his method and charged him as soon as she was released from the squeeze chute. Under normal circumstances it wouldn't have been hard to step out of her path, but he was so bundled up and the ground so slippery with snow, lube, and shit that he went down.  Knowing he didn't have time to get back up, he decided it would be in his best interest to roll under the corral fence before she could mash him into oblivion. He made it to the fence, he made it directly under the fence, he got stuck there. Now he was getting mashed on one side, and frozen on the other. Finally, the cow decided he wasn't worth the trouble and wandered off to tell the rest of the gals "she" was headed to better pastures in Calif.

The Cowman came home with frost bite on one side and bruises on the other, 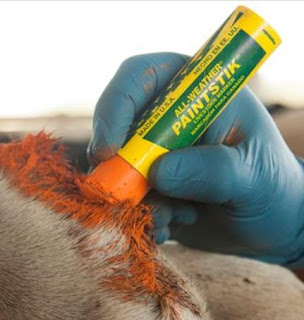 and the crazy cow,  she was re-marked as open... 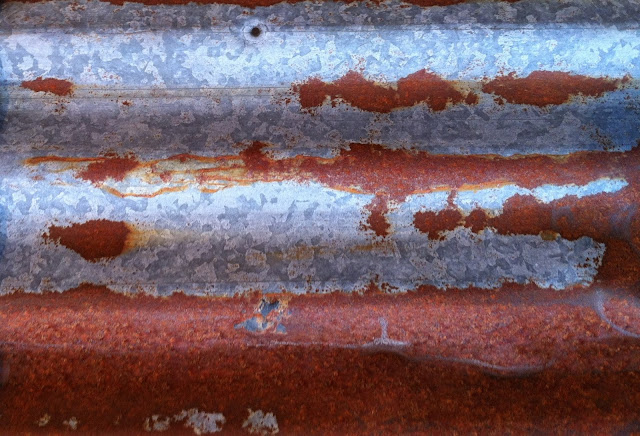 Feel'n like this ol piece of tin. Got a few rusty spots, got a few holes in the armor, got a few wrinkles, got a few gray days but... 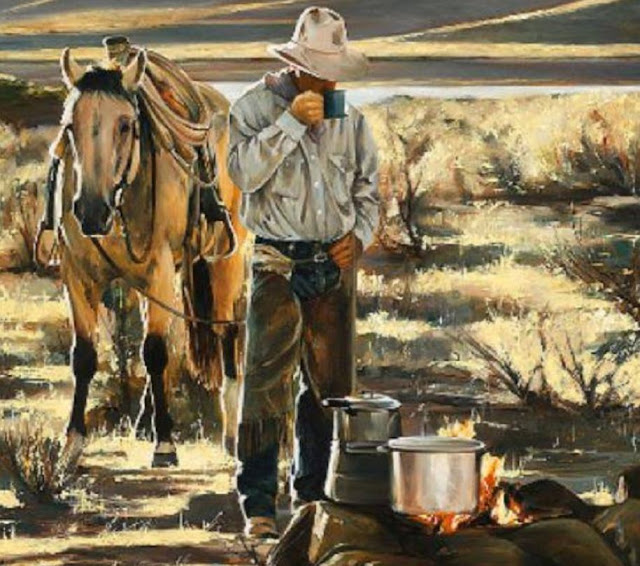 Fall is in the air and the cowmen are busy shipping out of the summer ranges.  Here we have had warm days and cool nights. The days when the North wind is not howling are glorious indeed.
A sure sign of fall is when Willie starts putting himself under the covers at night. 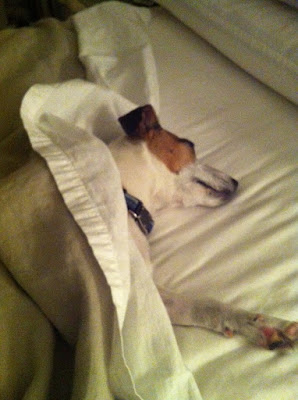 Sorting...
The sifting through stuff seems never ending at times. I got excited last night when I found a Sage fly rod case high up in a storage area, more excited when I opened it and found a Sage flannel rod holder inside... opened it up, praying for a Sage fly rod.  It contained a Phazer fly rod that is worth less than the Sage case. Ah well, it was fun for a minute there.

The house...
There have been few showing any interest, and we dropped the price by $5K, but no one has come to look at it. I'm concerned, but the fact is that few of the houses in this market/price range are moving right now.  My neighbors, who brought property in Colorado last fall to build on, are having the same problem. Their house is not seeing much interest either. They decided to buy a travel trailer and a new Expedition to pull it, and are headed to Colorado the middle of the month. Said they would rather be there getting ready to start that house than here.  It's great that they have the resources to do that.

Family...
My granddaughter, Taylor, and her husband live in LV. We heard from them shortly after the attack, they are fine.  I'm very glad that they sold their house, (in three days) and are moving up to WA next week. They have gotten good full time jobs there and will live with MySean & Amy til they find a house. Taylor is expecting, so there is that to look forward to as well. I will be a Great Grandma next year!

Fire...
This afternoon we had a fire start to the NW of my neighborhood.  The North wind has been blowing for days, making things very dry, and the fuel load is heavy. Cal Fire was on it in no time with a fire retardant bomber, a spotter, a helo, a dozer and numerous engines. It was 100% contained at 20 acres. They stopped it within 1/2 mile of our houses.  No easy feat with the amount of fuel available and the wind. 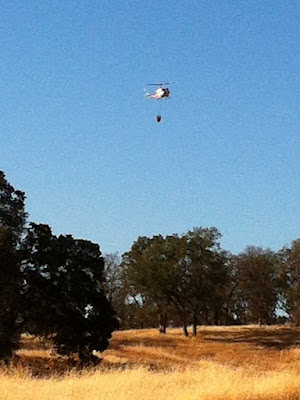