There I was reading the local newspaper this morning when there appeared a picture of a rather large buxom woman, she so reminded me of the first Stella prank.
You see I had been known to keep the cowman wondering when a prank was coming,
especially after the  Original Stella Incident:
http://brighidsplace.blogspot.com/2009/08/your-not-stella.html
(Which by the way he denied ever happened,  or ever knowing anyone by that name...good thing I had all those witnesses.)

It goes like this, months had passed since the Original Stella Incident, and I had waited impatiently for it to slip quietly to the back of Cowman's mind. (Remember here that I was raised around cowboys with a very dry sense of humor, and a predilection for pranks.)
We were all out to dinner at a well known local steakhouse. I had informed a girlfriend with us what was going down, mainly so I would have a ride home if the whole thing went south. I had paid the rather hefty sum of $25 dollars to a large buxom woman, who fancied herself an actress, to play the part of Stella.
About half way thru our dinner, the steakhouse door is thrown open with great gusto, and in comes this large woman, with busom heaving. She is made up like a cheap hooker and yelled that she has heard her man is in town, and where is he!
She spots the Cowman, yells his name, rushes over, jerks him out of his chair, smashes him against that heaving busom, and proceeds to lay one on him. Actually, she was doing such a good job I half believed her.
The Cowman having had the wind pretty much knocked out of him, and mindful that we were in a room packed full of people, wheezed out "who are you?"
She proceeded to inform him that there was no way he could have forgotten "his Stella".  Pounds him on the back, excuses herself to the restroom and slips out the back door.
It was worth a whole lot more than I paid to see the look on the faces of the other cowmen and The Cowman.

Then there was the time I seat belted a blowup babe, with "Himself Loves Stella" tattooed across her ch... but that's another story. 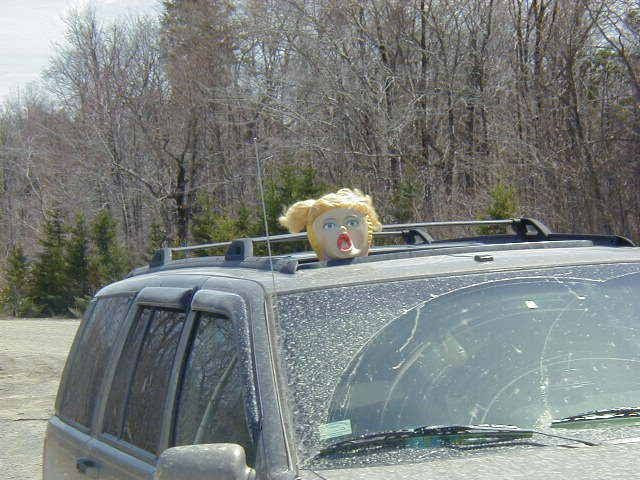 It's been three years since I walked out the door of the Cowman's life.  It's been two years since I scattered his ashes on the mountain side over looking the high valley that he loved.

Will I always feel I failed him, probably. But I learned a few things from that journey:

I learned that his doctors didn't expect him to make it to thirty.  I learned that I would not accept that, and neither would he.
I learned that after being thrown across a room, and sliding down the wall, I could get back up. That I could help him, who in the moment, didn't know it was me trying to correct the raging chemical imbalance.
I learned to be on a first name basis with most of the paramedics, flight medics, ambulance services and hospitals in two states.  I learned that the time between the start of his reactions and their arrival was fraught with danger for all of us.
I learned that you can do everything right and things can still go to hell pretty darn fast. I learned that if I showed any signs of panic, it simply made things worse.
I learned to be prepared, I learned when and how to approach a situation, and to always know where my kids were in a given moment.
I learned that I could be dead asleep and still feel a slight body temperature change, as long as I kept one hand on him.  I learned that it was a heck of a lot more mentally comfortable to wear jammies if there were going to be four paramedics in the room with us.

In the end, I learned that I couldn't save him from himself or his disease.   But damn, it's hard feeling that I failed him.  It's hard to know that my try, my desire, and my love weren't enough...
Posted by Brig at 10:53 PM 12 comments:

I drove up home to get the a/c fixed in the ol suv yesterday. Four summers without it in 100+ temps needs to come to an end.  As fate would have it the part that positively would be there this morning, wasn't.  It seems to have gotten on the parts truck, but failed to get off. I needed to get back to the bunkhouse to water for the daughter (yes they are back up at the cabin). So, still without a/c I headed out mid day.  It takes about an hour and a bit at 70 mph. With the outside temp at 110, the wind whipping my hair, and the radio blaring I had time to ponder...

Have I become one of those "tough as an ol boot" grannies the cowboys always talked about?  I never thought it a compliment, but now I wonder.
As a child I always thought myself a pistol, as that's what my dad called me, or a scamp, as that's what my gran called me.  What my brother called me doesn't really count, as it was my superior warrior skills that ticked him off.  He kept it up until his reach equaled mine, at which point I conceded the field, and he dropped the name calling.
The fair princess persona never appealed. Now, the warrior princess with long blonde braids, bright pink toenails, astride her trusty stead, with an Irish wolfhound at her side, had immeasurable appeal. It was often played out, alas with a Gordon Setter, or a Border Collie instead of a noble Wolfhound.  But oh, the rush of racing full out across the fields with utter abandon, to vanquish the imagined foe.
Now I'm a gran, but the wild child inside, still pushes to go full out. She just has her boots on now...
Posted by Brig at 10:19 PM 9 comments:

Still working on getting into kayaking. Thinking I can pull the little yellow plastic one out of the barn and practice in the river up at dad's. The river there is cold, fast, and there are no levees, that or my daughter's pool. The pool is probably the wiser course of action.  But then you know...
I think the kids are signing me up for senior dating services, as I'm getting a lot of e-mail from those sites.  The kids must think I would be less trouble for them, if I was some ol guy's problem. Hah!  Being a thoughtful mom, I agreed to one meet greet while I was up at my son's. OMG, a nice man, but he showed up at the restaurant wearing a kilt, & a shiny green shirt, and topped out at the center of my chest. He either needed a nurse or was looking for someone to play one!   I politely slugged  down two glasses of wine, which did nothing to make things less strange, and I was out of there.
Posted by Brig at 8:37 AM 16 comments:

A pic of my grand college girl, taken by her brother the devil doc up at the cabin.

The crew is back from the cabin.  I'm back at the bunkhouse, recovering... from another adventure in house sitting!   No beer (a fair amount of scotch) was consumed.  No bugs were killed (a fair amount of c'gars were).  Oh well, there was one bee, that over committed himself, by stinging me while I was skimming the pool.
Starting to wonder what gives with my extended family always asking me to house sit.  How magnanimous of them not to invite trouble (me) along on their trips...
Posted by Brig at 9:37 AM 7 comments:

A guide to house sitting...

Yesterday my daughter, all the kids, all their pickups & jet skis went up to their cabin at the lake for the 4th.  I am house/dog/cat sitting for them.

I gave her a status report via e-mail today:
No worries, it's 110 in the shade here.
Things went pretty well last night.  That damn cat of your's sure likes to yowl at night. If you put duck tape on one paw it seems to quiet right down, oh and one wrap around the muzzle.
Finally got to sleep about 3AM, at 3:15 sharp the guys decided it was time to spray the tomato field next to the house with the helicopter. I didn't mean to throw him off by flashing my new high-powered tactical flashlight at him. Just trying to be friendly, geez! Your aerial applicator bill may be a little higher than normal.
I'm sure I'll figure out how to turn OFF that running a muck pool sweep and the mega flat screen tv ON. I have my faithful multi-tool so I'm working on it.
Watered most of the yard this morning, may have over watered a few things, and missed a few. Who knew there was a ground wasps nest where I found it.
I'm sure Duke (my grandson's big choc lab), didn't mean to goose the pool guy into the pool. That bill may also be a bit more.
Boy, that was some lock you had on the liquor cabinet. By the way your running low on scotch and c'gars.
Everything is fine... Love You, Mom