YeeHaw, Dad scored this morning with the Salmon.  He has been beam'n all day.  Shared the bounty with our neighbors and we be smok'n Salmon this weekend. 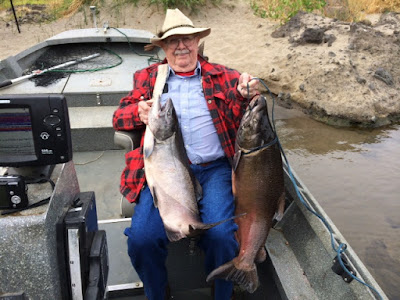 A very big THANK YOU to my SIL Sass and family friend Kris.  You went the extra mile to make it a special day for the ol guy.

Dad has not been happy with me, as I have refused to take him salmon fishing in Ol Ugly without one of the guys going along to help. 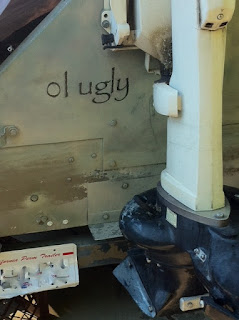 There is adventurous and then there is foolhardy. I don't mind being the first, but prefer not to be the second.
As most of the guys are busy with other endeavors, I told Dad I would get him on a guided boat here. Nope, he insisted on a guided boat two hours travel time away.  He set it up for Thursday morning. When I spoke with the guide to get directions and time, he said, "have him here ready to go at 5 AM". I told Dad I was taking him to the guide as that was too far afield for him to drive by himself.  He was good with that, and up and ready to hit the road at 3 AM in order to meet the guide on time.  Half way there Dad said under his breath... "this was not a wise idea, I should have let you get a local guide". I cupped an ear and asked him to repeat that, as I wasn't sure I had heard him correctly the first time.
He had a good time fishing, but only got two bumps and no salmon were boated. Such is the nature of fishing and life.

Saturday is Dad's 92nd birthday. The WWW (wealth widder woman) has invited him to lunch to celebrate. 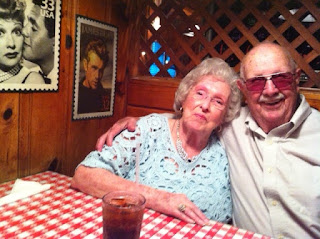 Since  WWW doesn't drive anymore, after that crazy fellow on a bicycle somehow ended up as a hood ornament on her Lincoln, I will be ferrying them around in my SUV, again...
Posted by Brig at 12:15 AM 8 comments:

So what has been happening here, you asked with baited breath:
One of my SIL's gave me a fresh caught salmon.  Her late husband had the best smoked salmon recipe, so I got that recipe as well.  Nothing to smoke it in, requiring a trip to SA Thrift store. Found a like new Weber for $5.  Brined the salmon in the BIL's recipe.  Smoked that sucker with the help of the flying man. It turned out very well.  Sent some home with the pilotman, served some to Dad's poker night cronies, ate some, and stashed the rest for the return of the pilot.

Spent a day on the river in our kayaks with the pilotman.  My Kayak is too small for much touring, so he found me another, and I will get it this week. He tried it out at Tahoe and says that it "maybe" faster than his... Yes!  Not competitive at all here...
Willie recently got away from Dad on a return trip from the mailbox. He took out after the neighbors cat. Both went down a drain pipe, and the battle began.  Neighbor girls boyfriend bravely rescued Willie from the pipe.  From the looks of Willie he lost the skirmish big time.  Cleaned him up and took him to the vet as there was a tear in his third eyelid that I wasn't equipped to repair.  He is well now, following surgery. The girls next door (their mauler cat) brought this cute get well basket for Willie. 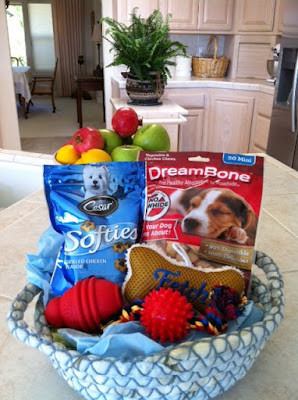 He is love'n the extra attention from Dad & the girls. He still hasn't learned his lesson about cats, especially ones twice his size.

I'm still going to Yoga... so there I was in Yoga class practicing my CCW draw from warrior two pose, wear'n my favorite tee when I was told to breathe. What! 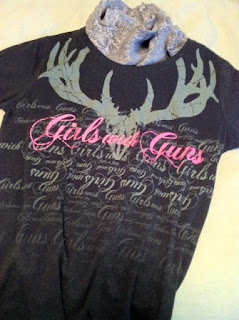 Was having trouble with the Walther. The pilotman had me practice til I could field strip that thing in near darkness. It has been cleaned, and I have learned that it doesn't function well if it is the slightest bit dirty.  I have been spoiled by the little Sig that will keep on going no matter how dirty it is.  Have also learned that even the oldest & best shooters at the range don't know everything. The Walther wasn't firing and I had no idea why, walked it over to a couple of the regulars. They tried every thing they could think of, no go.  Took it on down the line to a couple more guys that work with many guns.  They looked at it, tried it, fiddled with it, no go. Took it further down the line to the guy that works in the gunny store, he fiddled with it, no go. Then he walks to the line and puts three down range, dead on.  We all looked around in amazement. "What did you do to it?" we asked. "I switched it off Safe," he answered.

Some songs just tug at your heart strings and make long forgotten memories come to mind...