One fine day for working cattle, the Cowman loaded up the horses and I to move some bulls on the other ranch. He was riding his favorite bay, Seco and I was on the aptly named Whitey. Whitey was an excellent corral horse, but was a really rough ride in the field. Who every got him for the long days afield referred to him as the kidney killer.
The boss had been on a fishing trip to Texas and ended up buying a load of Brahma bulls. They arrived in due time, and went to it, but were a bugger to work. If you got them the tiniest bit hot they blew up on you. Or they just blew up for no reason at all.

The Cowman sent Whitey and I way around to bring in the bulls from the far corner. I gathered a bunch and pushed them into the corrals, then circled back to pickup the one that had slipped away from me. He had decided that he liked it were he was and didn't plan on moving anytime soon. Thinking to trick him into seeing it my way, I picked up a few cows on the way back to him. The cows were showing him a little interest so he went with the flow for a while. About a half mile from the corrals he decided not a step further was he going. 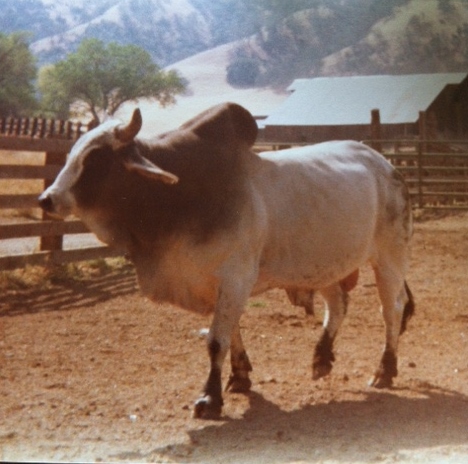 Off in the distance I see the Cowman waving at me to get it in gear, we had a lot more cattle to gather. The bull wasn't seeing it that way. I tried the cow trick again, but no. As I sat atop Whitey eyeing that son-of-a it occurred to me that he was red eyeing us back. He had decided that he didn't want us there. He charged Whitey, who spun at the last minute, and the bull went whizzing by. He was a big bull and fast, he kept trying. The more he missed the madder he got. Once he came so close to nailing Whitey and busting my leg in the process that he blew snot all over us. Enough already.
The Cowman finally seeing that I was making no headway rode over to see what was going on. Now the bull was trying to take him. Big mistake, after the third time he tried to dump him off his favorite bay, the Cowman pulled out his shotgun and waited. Sure enough the next time that crazy bull tried to take him he got a face full of bird shot. Stepping back the Brahma shook his head, looked around with his now one good eye, and took off for the corrals at a fair clip. Whitey and I could have told him, don't mess with a Cowman, but some just learn the hard way.
Posted by Brig at 11:33 PM 9 comments: 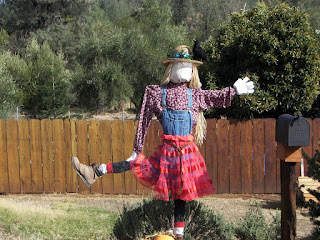 Tis the season for the Cali gopher stomp'n scarecrow women. 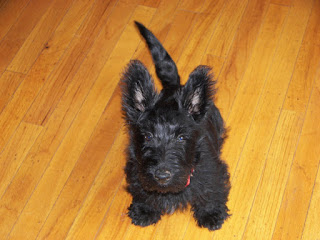 This is my Fergus, just call him "Gus". Actually it doesn't much matter what you call him, he won't come unless he wants too. He is 3.5 months old and a holy terror.

Mall on the Mountain

I've returned home from a quick trip to my brother's in Ideeho. It had been a long time since I had gotten to see my nephews, their wives, and little ones, so off I flew.
Flying is one of my favorite things, preferably via Heli, but a fixed wing will do in a pinch. Airports, lines, strange seatmates, not so much.
After getting to spend an afternoon and dinner with the kids, we drove up the mountains to my brother's home. Getting in after dark is always kind of disorienting, and this time was no different.
I was given the run of the house & town the next day, as both brother & wife had to go down the mountain to their jobs. I took a few pictures, walked all around town, and chatted up the locals that I happened onto. When my brother got home he asked what the plan was for the next day. "Haven't made any," I said. He said he was going to the Mall on the Mountain, and I could go along if I wanted. Well I'm not big on shopping or malls but I said I would go just to spend the time in his company. He said he usually finds a little something to his liking when he goes, so the plan was made.
Early the next morning after a huge breakfast, my sister-in-law is one of those fantastic cooks, we jumped in the ol suburban and headed off. He drove up the mountain, past the high school, past the large forest service complex, and onto a nice road. There were a fair number of others going up the mountain as well. When we got to the Mall on the Mountain parking was an adventure. We finally found a good parking place and started our shopping. After scouting the goods for a bargain, I found a gem of a heavy duty fire pit complete with footrest and spark screen. The price was right, so we loaded it up and away we went.
On the way home we scouted for elk, checked out the progress on the reforestation of a recent burn, and told each other how much we wished we lived closer, and other things.
When we got back to the house, we proudly showed my bargain to my sis-in-law. Who promptly said that she would have the guys at work crate it up and she would ship it to my home. She didn't really seem overly impressed with my shopping skills. My brother said it was a gem and every time he built a fire in it he would be reminded of me. How sweet is that!
Posted by Brig at 8:49 PM 12 comments: