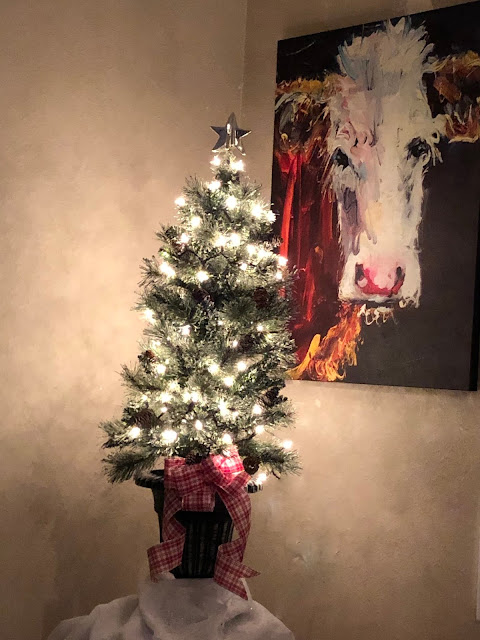 I decided early on that this year was going to be about the reason for the season and how much there is to be thankful for.  One of which is: Not being a horseback in a freezing rain pushing cows to the corrals.

The presents are wrapped and shipped or waiting to be delivered. Two small trees and a few other decorations are up in the hovel. 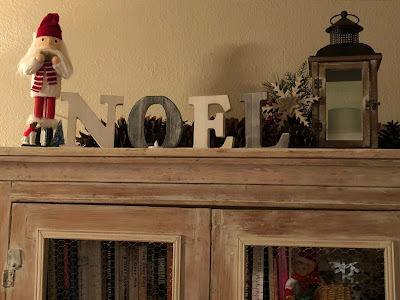 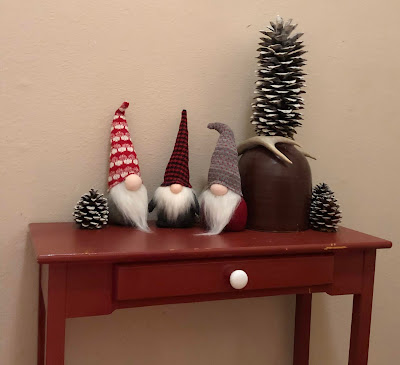 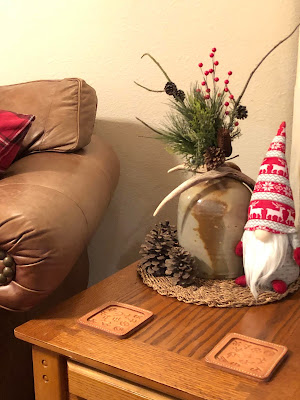 With All the hustle and bustle of this time of year most people have been friendly and kind. Then there are the few that seem to be just rude no matter the season.  There was one such woman the other day at the UPS store. She was pacing around the store, I was standing in line.  When another clerk came in, pointed at me, and said "I'll take the next person in line."  Since the pacing lady!? was in the store before me, I wanted to let her know that the clerk could help her now.  I said "Are you in line, Because the..."  When she turned to me and snapped "Are you an idiot, of course I'm in line! Do you think I would be here if I weren't!"  I took a deep breath, and whispered a prayer to myself: "let God & karma take care of her."  As she glared at me, grabbed a box from a side table and stomped up to the counter, I'm pretty sure she had no idea how God's grace saved both of us that day.

All the kids & grandkids are well and good!!! I'm warm and dry, baking cookies, drinking eggnog, and watching movies with Willie. 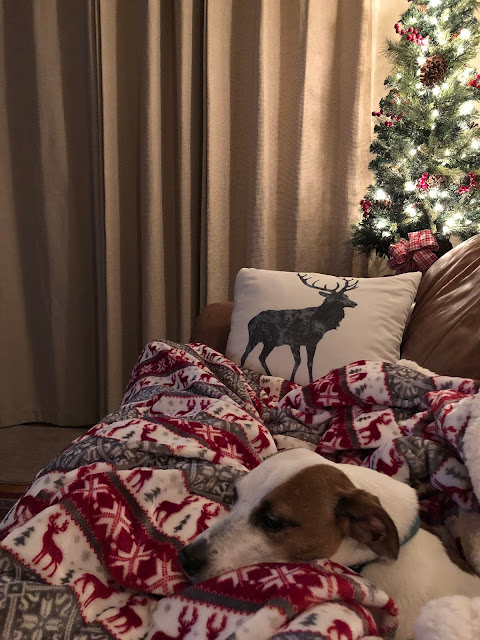 Wishing you and yours a Blessed Christmas!
Posted by Brig at 1:41 PM 28 comments:

The Team that could...

Before Thanksgiving I got to watch from the stands as granddaughter Lauren played college volleyball for FRC in Quincy, Calif.


The FRC Golden Eagles made it to the state championship finals in SoCal.

FRC is a hard charging team and they had worked their butts off to get to the state finals.
This last Sunday, Lauren and her teammates won the 2019 CCCAA Women's Volleyball State Championship! 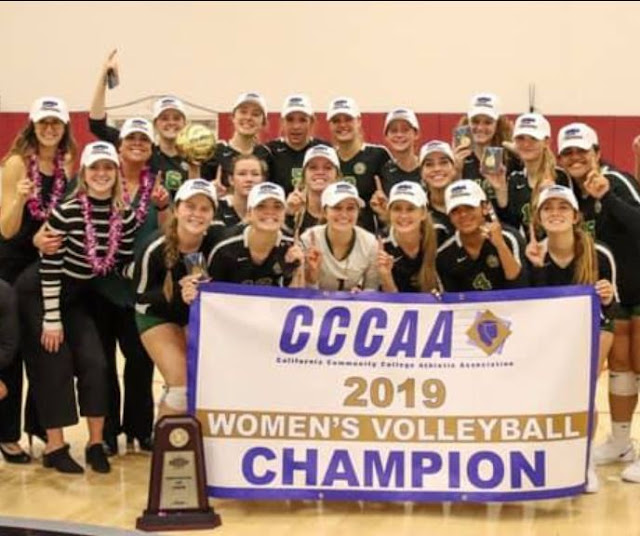 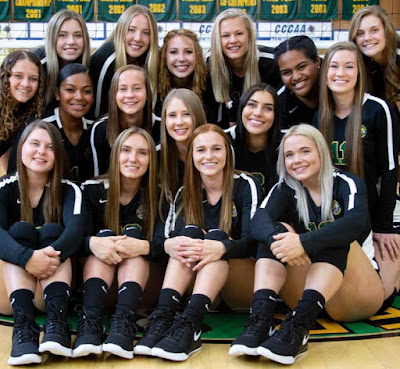 What an amazing team! Congrats Ladies, you earned every bit of this...
Posted by Brig at 10:51 AM 20 comments:

As MySean & I headed back up North I saw that Carrie's tree had been decorated between our trip down and back. It caused me to smile as I knew well the history of Carrie's tree. How could one live in NorCal and not know!  Carrie's tree is much more than an ol Osage orange beside I5... 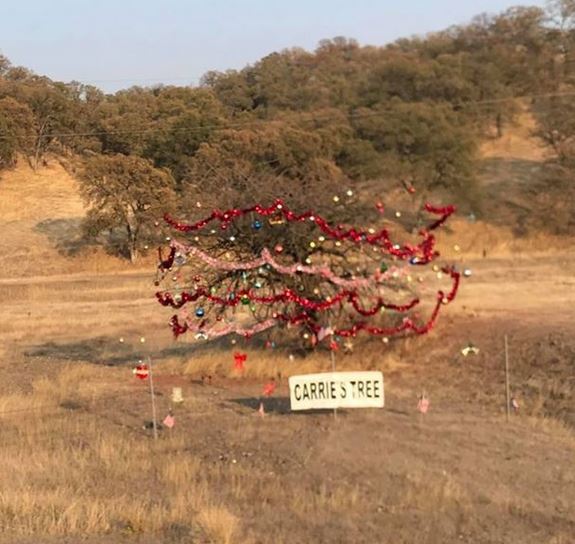 Here is the story by Dottie Smith:

"You've probably driven by this Christmas tree just north of Red Bluff on Interstate 5 and wondered about it. I did, and I set out on a search to find why that Charlie Brown kind of tree was always decorated at Christmas time and who was doing it. It's known as Carrie’s Christmas tree and its located just before the roadside rest area. It stands there all by itself all decked out with bright-colored Christmas tree decorations. The story of that tree is interesting enough to be told. Years ago in the early 1960s when major reconstruction work began to get underway on that section of the highway, Cottonwood resident and lover of trees Carrie Bogue asked the road officials if she could dig up the tree and move it out of harm’s way. It was an Osage orange and pretty rare in Northern California. She was denied her simple request. Work on the highway continued and somehow her tree managed to remain standing through the work. However, a few years later, it died. And then, in 1966, a few years after the tree died, Carrie died. She was 93 years old.
Carrie had many friends. Among them were Ruth and Cary Chadwick of Anderson who had been friends of Carrie’s for at least 40 years. They knew the story of Carrie and her tree, and one day as they were driving by the “dead” tree, they noticed it had miraculously come back to life! And of course they thought it was Carrie, now in the form of a tree. The Chadwick’s had known Carrie well. Carrie had told them, and others, that if she could come back to life after death, she wanted to come back as a tree. And so, according to the Chadwick’s, and to everyone else who knew Carrie well, there she was, alive again, this time as a tree, just as she wished. That Christmas season, in 1967, the Chadwick’s decorated Carrie’s tree. They covered the tree with bright garlands, tinsels and bows for everyone to see as they passed by on the highway that had now become a freeway.
Over the years, the tree grew larger and taller making it more difficult for the Chadwick’s to decorate. They continued decorating her tree for at least twenty more years until their old ages and poor health began getting in the way. In approximately 1990, their friends Dale and Larry McClure, also of Cottonwood, began helping them out. A few years later, the McClure’s became the lone decorators of Carrie’s tree. For two years the tree stood undecorated until the Hoofard and Lopez families decided to take over. For years they decorated it without anyone knowing they were the decorators. Until a family friend drove by and spotted them. They decided it was time to let everyone know who they were. On the same day every year this thoughtful family meets at the tree to bring happiness to everyone that travels I-5. They love hearing people honk and wave from both directions and they love hearing how much joy it brings to people. They said they will continue the tradition until it’s time for the next generation to take over. They have added lights to the tree and have also placed a sign big enough to easily read from the freeway that proclaims it as “Carrie’s Tree”."