Bingo was the vice of choice for the Cowman's maternal grandmother. She was a lovely elder, who had the "sight" and could drink you under the table any day of the week. When she moved closer to family so we could keep a caring eye on her, the vice came with her.

My volunteering to be the one to take her to weekly bingo in the church basement seemed at the time, a kind thing to do. How much would it take for me to drive in from the ranch, pick her up, and take her for a few hours of bingo? In my inexperience I hadn't realized how serious the whole thing was to her.

She always met me at her apartment door, nicely dressed, carrying a cane, and a huge handbag. The huge handbag contained several sweet little ol lady hankies, her bingo money, a dozen or more brightly colored marker dabbers, her special cushion, a wallet for identification, her smokes, a propane fire stick lighter, her mace, her loaded pistol, and her flask. Most of these items were not allowed in the church basement, but she said that was between her and her God!

She would hustle into the basement while I was parking the pickup, and was usually settling in by the time I got down stairs. There was a whole lot of prep before the bingo games started. A certain place to sit, a certain order to the placement of all her paraphernalia and a few comments to the other elders (usually of a derogatory nature).

One particular evening she commented to me that she had just about had it with the ol crone setting next to her. Thinking to divert her attention I asked if she had spoken to an elderly gentleman in a wheelchair that she had previously seemed to be fond of. "No, and don't be trying to change the subject." Having put me in my place, she continued her game.

Things got a bit worse when the ol crone won the next game, Gran thinking she had bingoed first. The elder gentleman wheeled over to congratulate the ol crone. He no sooner got the words out of his wizened mouth than Gran was on him like a bad rash. She took to him with her cane, at the same time trying to keep up with the dobbing of her multiple bingo cards, and giving the ol crone what for. After I pulled her off the elder gentleman, righted his wheelchair, picked up all her paraphernalia, apologized all around, and hustled her towards the door, the sirens sounded. She had set off the fire alarms with her smokes.

I got a call from the Priest a few days later, the Cowman's gran was banned from bingo, and would be expected at confession and mass, frequently. Good luck on that one, Father!
Posted by Brig at 8:17 AM 19 comments: 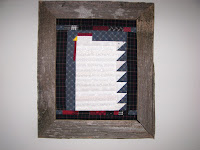 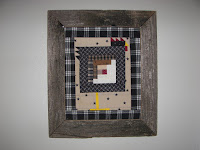 Just a few of the chicks I made from a basic pattern in a Country Threads quilt book. Altered the design a little and put them in homemade barnwood frames.
Posted by Brig at 12:42 PM 11 comments: