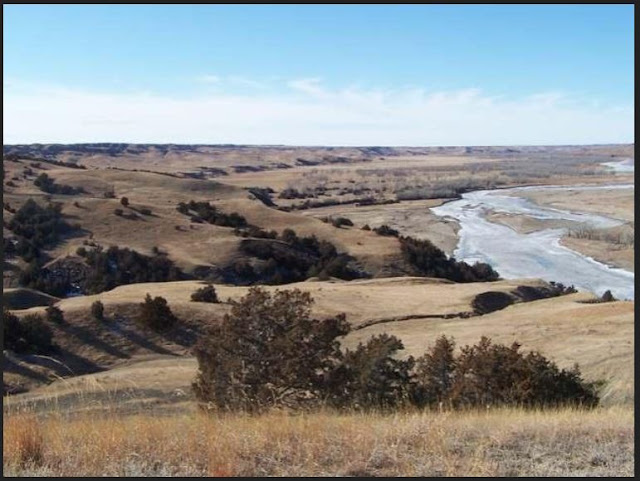 We bought our food supply in Ft. Pierre.  During early fall we would buy groceries and vegetables to last all winter in case we became snowbound; in  spring we would buy food to last through summer and haying. People would put up what native grass they could for the calves and horses they used.  We kept a milk cow so had milk and butter and had our own beef during the winter;  for summer meat we bought cured meat such as bacon and ham.

There was quite a variety of wild fruit, some very nice plums, wild grapes, chokeberries, buffalo berries and a scarce amount of others.  When our apple trees began to bear we had a very nice summer apple that I mixed with this wild fruit that made delicious jams, butter and jells.  Sometimes a late frost would kill this fruit supply.

During the period between the opening of the territory and about 1904-05 the country was very sparsely settled.  There were more single men and fewer married men and families who had small herds of cattle or horses and sheep.  They did no farming, sometimes a little gardening.  Hogs were a curiosity as they did not raise feed for them.  One neighbor about eight miles from us was given a pig.  Mrs. Haxby fed it with scraps from the table and milk and bought a little grain to fatten it for good meat.  At the right age for good meat they butchered it;  Mrs. Haxby cooked it for other people but she could not eat the flesh of her pet, Johnny.

The big cattle companies of free range days were coming to a close.

In the first week of May, 1905, came a very unusual blizzard for that time of year and caught cattle, horses and sheep that were put out on the open prairie.  This caused a very heavy loss.  My husband lost nearly all of his cattle and horses.  This left us heavily in debt with only the homestead and a few head of stock.  But when my husband first came there he leased a very good school section and fenced it and when the additional homestead act was passed he added two more homesteads that joined the original.  He could not get the third because the land was taken up that joined his land.  With this additional land we were pretty well established and with hard work and close living after a good many years, we were able to pay out in spite of the dry years, grasshoppers and depression.

Our house with the dirt roof began to leak pretty badly so we thought by putting boards over the dirt it would keep the rain from washing the dirt away.  One day there came a very hard wind that lifted this part of the roof right off the house.  We were needing more room so we put on another addition of logs and put on a shingle roof.  Now we had five rooms of cedar logs and a dry roof.

About this time, all the worthwhile land was taken up.  People came from cities, towns and country from other states;  people from all occupations.  Some came with intentions of making homes, some came for speculation and adventure.  It was learned that with the uncertainty of rainfall, one could not make a living on 160 acres of land and the greatest number of homesteaders left.  Some did not make final proof, some sold their land after final proof, some relinquished their right and some just left and the land went for taxes.

Free range days were gone.  People, mostly farmers with a little money to buy or rent land and keep a few cows, could tide over a dry year and make a go of it and eventually make a success.

I was glad to have people stay so we could have schools, Sunday schools for our children and eventually churches.

This development has been going on for the past 50 years through wars, dry years and depressions.

During the 30 years Lum and I lived at the ranch in northern Haakon County, nine children were born, 5 girls and 4 boys.  Of these nine children, one son Clifford, who was born in 1900, passed away in 1943; one son, Paul still lives on the old ranch; a daughter, Helen Parsons, still lives in Haakon County; one daughter lives in St. Louis and the others live in California.  I now have 31 grandchildren and 50 great grandchildren.

Lum and I moved to central California with the three youngest daughters in 1929 where I continue to make my home.

Numerous visits have been made back to the  South Dakota ranch and while we were there in the spring of 1942, Lum passed away in Phillip at the age of 83.

I think it is of interest that Lum came to South Dakota in 1885 by driving an ox team from Chadron to Buffalo Gap and the next spring, rode the first train into Rapid City.  Then, for contrast, when he returned for the last time in 1942, he flew in by plane.

My great grandmother Jessie Elshere, passed away in Jan 1969, one month shy of her 93rd birthday.