Wednesday Uber got me to PDX in plenty of time to catch my flight to SMF.  After I was seated a fellow got on with a huge box of Voodoo Doughnuts as his only carry on. I took it as a good sign.

Flew into SMF and was picked up by a girlfriend, and was delivered to my granddaughter Ali's in Grimes. Got Hank (my pickup) going and ran some errands. The next day after getting Hank serviced, I drove up to RB  to spend a few hours with friends, have last eye exams, and check in with the estate attorney. The judge hadn't signed & had the estate papers filed, yet. I will have to finish the rest via mail from up here. This will end someday.
Lauren's graduation went off without a hitch, and her speech as ASB pres was very well done.  Marymine's kids are a very tight group, and always looking out for each other.  Love my grandkids. 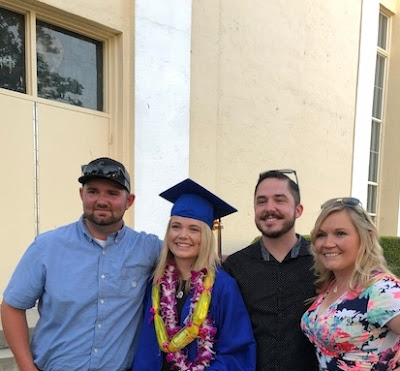 Friday, Sean drove his pickup down from Vancouver in time to attend Lauren's HS graduation in Arbuckle. Saturday morning he had a meeting with a good friend of his in Woodland. I was sent on a mission to get the flowers for a party for Lauren. After Sean & I got back to Ali's house that afternoon, we decided to hitch up and head North a day early, as Sean had the long drive to the Arlington project Monday.  Sean pulled his trailer, and I followed driving Hank.

When we stopped in Redding for gas it was 103 degrees of hot. After two more fuel stops and a lot of miles we pulled into the driveway in Vancouver at 1:30 AM Sunday.
The things you see on the road never fail to amaze... as we were passing Mt Shasta we came upon this Cadillac Escalade (with Oregon plates) ripping down the road. Not only did it have this very large precarious load, but was packed full of very large people... I was laughing so hard I couldn't take a pic... but Sean got one... 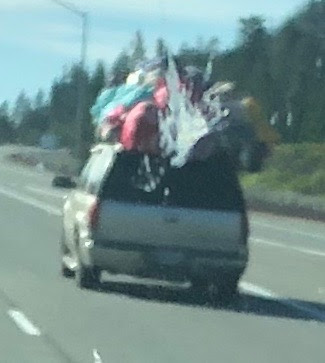