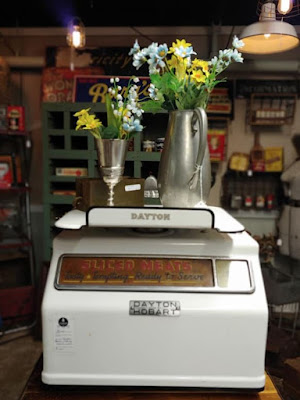 I was looking at a set of scales in an antique store here and it brought back so many memories of the times and people of Bosse's Meat Market.
Back in the day the Cowman & one of his brothers worked after school & weekends, when they weren't needed on the ranch, in Bosse's Meat Market in Red Bluff.  Bosse's was a fixture in town, just across the street from Blue's Barber shop (where all the guys went for haircuts and the news).

It was where my MIL and the Cowman's grandmother called in their meat & grocery orders. The order would be ready for pickup when who ever was sent to pick it up got there.  Curbside service was the norm, and it was put on a running tab, that my FIL paid off monthly.
When my kids were little, I would go in and they would be given wieners straight out of the case to gnaw on, or a small ball of raw hamburger.  My MIL had done it with all her kids, and not one of the seven suffered from it (or turned vegan), and neither did mine.

Bert Bosse's daughter Diane, and son in law, Jack Burgess worked in the shop.  My father in law would later go in as a silent partner with Jack on a butcher shop & meat locker. Lots of elk, deer, hog, and cattle would be processed there.
Both Bosse's Market and Jack's Meat's are long gone now, but the memories remain of salt of the earth, good people.
I typed Jack's name in FB and his son, Jack Burgess came up. Low and behold, he has posted photos of his grandfather Bosse's ol family place and surrounds in Idaho.

Jack resides in Ketchum, Idaho where he has a woodcarving studio. To say he's talented is an understatement. 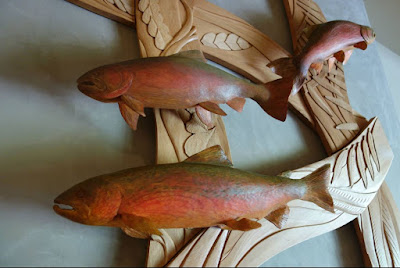 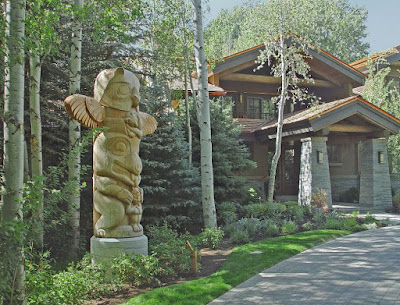 You can see more of his art at:

LOL, once again I have wandered off the beaten path because of an item from another time and place...