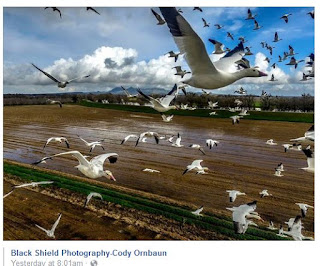 Since I posted Marymine's video, there have been a few questions about the snow geese.   This article might be of interest:

"More than a million snow geese return to California’s wetlands every winter.

It’s a migration dating back millennia. Their arrival sends bird enthusiasts and conservationists flocking to the Sacramento Valley to catch the noisy spectacle.

1. Where did the snow geese come from?

For thousands of years, snow geese have migrated from the Arctic along the Pacific flyway to winter on the Sacramento River floodplain.

Now that humans control the river’s flow through dams and other management, natural flooding no longer occurs. “That’s why preserving wetland wildlife refuges (where the geese now congregate) is so important.”

While some migrate from as far as Russia, most of California’s snow geese are likely flying from Alaska and western Canada, Humboldt State University wildlife management professor and goose expert Jeff Black said. While at their summer breeding grounds, snow geese lose their flight feathers, grounding them. They grow back at the end of summer, and the geese take flight for the western United States and Mexico.

2. Where is home now that they’re here?

Besides refuges, snow geese and other wetland wildlife hangout in rice fields, which serve as “surrogate wetlands.”

Rice farmers, who flood their fields after the fall harvest, welcome them, said Jim Morris, spokesman for the California Rice Commission in Sacramento. Snow geese arrive “just in time” to fertilize fields with their droppings, enriching soil before spring planting.

The fields supply more than 60% of the fall/winter food consumed by wetland migratory birds, Morris said. Part of that feast is the stubble left from harvested rice plants. What they don’t eat, their big flappy feet may smack down, pushing it under water and into the soil. “You need the stubble to decompose before you can plant again, (so birds provide) a real service.”

California is the second largest rice-producing state after Arkansas, growing more than four billion pounds of rice. More than 90% is sushi rice.

Snow geese are hard to miss. They’re a big bird with a 4.5-foot wingspan, according to the Audubon Society, and usually gather in large numbers.

They sport white bodies with black wingtips, a look scientists think makes them blend in with the snow, Black said.