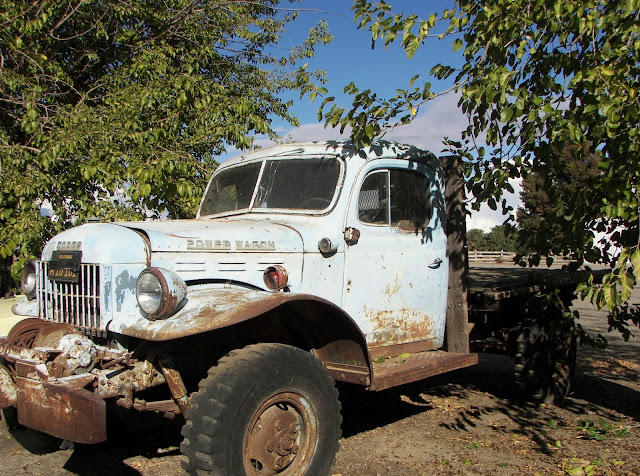 I have been trying, ever since the old power wagon carcass was parked next to the bunkhouse, to get Colt to fix it up. He had it given to him by a neighboring farmer, but he says it would take too much money and time. I think time is the biggest hold up, he flat out works that kid, and when he isn't working on the family farming operations, he's helping friends & neighbors with their operations.


Had a great lunch with Marymine and three of the grandkids at Sierra Nevada Brewery to celebrate my birthday. Lauren couldn't come as it was the first day of school for her.
Son, Sean and his crew had all ready messaged the heck out of me with birthday wishes from Vancouver.

Lunch with part of my crew & getting the details of what everyone has been doing was the best present. Cody starts community college soon to pickup some classes before heading off to med school. Colt is farming with his dad, Ali is working full time for a big chem company, and Marymine is juggling the whole shebang.

As we were finishing hugging goodbye I patted the awesome cowcatcher that Colt made for his big Dodge Ram, and said "I think Hank needs one of these."
"Who is Hank?" Colt asked.
"My pickup," I said,  and out the pics came, like any proud granny would show...  Colt listened as I told the story of Hank, then grabbed me in his famous bear hug, and said, "Nanny, you got a shotgun for your birthday, and you drive a pickup, you are The Coolest granny ever."

Meanwhile, back at the home, Dad got bored and decided to carve a mallard in the stock of what was supposedly my old Ithaca 12ga. Guess he decided that it was his again, since I was getting a R 870 boomstick for my birthday.
"Are you sure you want to do this, it has really nice mallards engraved on the receiver already?"
"Yep,  go out to the shop and get me this list of stuff, I'm going to do it on the kitchen table. I have a pattern I got off my computer."
"OK, what brought this on?"
"When I was up at your brother's he showed me the beautiful stock carvings some guy did on his best shotgun."
"Ah, that explains it!" 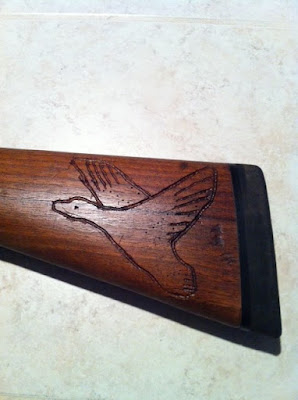 "Ah, it has character Dad, and it's one of a kind that's for sure!"
Dad laughed and said, "Yep, looks like shit!"