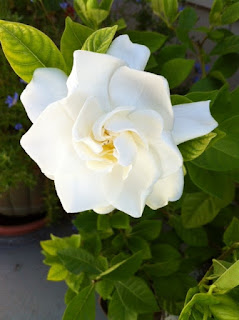 Morning,
Just so you know... I'm working on cranky, I am tired, fed up, not getting enough sleep, and not getting the stuff done that needs to get done around here... So as soon as this gets posted I'm off to inflict the berserker on friends at breakfast. True friends, that will call me on it when the berserker gets out of hand.

This yard is a pain, it is a nightmare of over grown shrubs.  Now there is trouble in the trees, which are the backbone of any landscape.  I called The landscape Guru and asked him to go over the problems with me.
The sprinkler system is not functioning properly, way too many small heads, I can fix that.  Broken lines, also fixable. The best solution would be to rip out all the sprinkler lines and start over. I can't afford to do that, and seem to have misplaced my wand...
The garden Guru said he would remove the same shrubs I have been wanting to take out. Hard prune the others.  It got funny when we both pointed to a shrub and said take it out, or hard prune in unison. If nothing else it was good to know that I wasn't making too many mistakes.
We circled the yard three times, with him taking pictures to send to the arborist, as neither of us felt qualified to make the final call on some of the trees.
Three of the leyland cypress are dying, two big junipers have bit the dust (which does not break my heart), and there is die back in a cedar, and some of the redwoods, as well as stunted growth in one of the old oaks.

He suspects the big ol oak might have SOD. The Guru said that it could have been stopped years ago, but the Cali enviros wouldn't spray when it was fixable, now it's not fixable, and California very well could lose a huge amount of its oaks. There will be repercussions on so many levels if this comes to pass.

This cedar has declined just in the last couple of months. We both think this is a residual effect of water rationing and the drought.

The redwoods are not well either. These I would really hate to lose as they are my favorites.  They are on the north and west sides of the house providing much needed shade and shelter.

The Guru thinks this is also the effects of drought and water rationing. We will see what the arborist says.

I knew that the Guru had given mom advice on the yard design early on. I also suspected that mom went way beyond his recommendations, and kept stuffing plants in...sigh

When we got to the end of the overview he said, "you have done a good job on a yard that is too much for one person, you know what your doing, keep at it."

PS:
I've returned from a good breakfast with friends. They were warned at the beginning that I was working on cranky and had already done a cranky blog post.  They LOL, they fed me, told me I badly needed a vacation, and that if I started to cry they would really become concerned, otherwise carry on...