It started out as a very basic plan, a simple plan.

Eight months ago I made plans to go to a reunion of the Cowman's family in Oregon this month. My brother was coming to stay with Dad for the few days I would be gone.  Simple.
A week ago, my brother said he couldn't possibly leave his place in Ideeho for that long as they had just put in expensive landscaping and had to water it.  Less simple.
"Just put Dad on a flight out of SMF and I'll pick him up, then you can drive over and get him after the reunion." Less and less simple.
"No, I won't put him on a flight, he's 92, and doesn't get around that well. It's too much for him." I simply stated.

Dad said he didn't want to fly anyway, he wanted me to drive him on a little loop to see some ol friends and ol hunting grounds in Idaho, oh... and Nevada. Less simple.

So, I'm taking Dad to Oregon with me, where my brother will pick him up and take him to his place in Idaho, while I'm at the reunion.  Then I will drive over and pickup Dad to take him on his little loop.
I've had the Rav4 serviced and it's ready to go. I prefer traveling simply incognito.


Dad decided on the route for his little loop.
"Just a few friends to visit, and a few ol hunt'n camps to show you, Sis. Well and maybe a little fish'n too." Simple.
Here's the route: 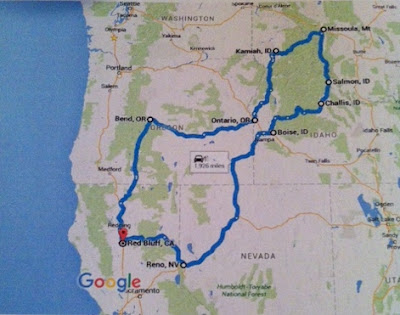