Buying a new refrigerator, or spending your brother's share of the inheritance can be the same thing. I know that it is possible to do both in one go.
It started with Dad's 12 year old frig making strange noises. Then it defrosted the freezer side. After I cleaned out the freezer and hauled our frozen goods to the neighbors freezer, it decided to be freezy again. Carted all the stuff back and reloaded. Then the frig side went. Called the repair man.  Unless I wanted to spend more than the frig was worth, I needed to turn the dials, thump on the solenoidal housing, and pray it would stay alive til I could get a new one.
No problem, found the one I wanted online, in a price range I thought my brother would approve of. Down to the local (same retailer as online) store to see if they had the same one in stock.  Nope, they would have to order it. Plus, if I ordered it in store they would charge me $50 for delivery & set up, +10 for the disposal of the old frig.  What! if I ordered it online all that was included in the price, which by the way was $100 less... Back home to order it online. Ordered it, printed out my confirmation, and prayed that all would go smoothly.  Day came that I had seen as the delivery date, pulled the confirmation order, and the delivery date had been changed to a week further out. Damn, I could not talk them into changing it back to the original date.  I was now looking at seven days of no frig/freezer, while living with Dad who has to have his homemade coffee milkshake every afternoon, or else!
Off to the other local big box store, HD. Found a frig I liked, they had it in stock. After a bunch of conference calls with their delivery service, they agreed to deliver & setup that afternoon. I'm pretty darn sure they just wanted to get the fierce woman, who had a 91 year old Dad at home waiting for his homemade milkshake, out of the store. But what ever!
I get back home, call the first store, and cancel that order.  They are not as gracious as they could have been.  I explain in cowboy terms that it just wasn't meant to be.
Let Dad know we were getting the new frig from HD that afternoon.  And the phone rings, it's HD, the frig they had in the stock room was found to be severely damaged when they uncrated it. They could bend the rules of engagement and deliver the floor model if it was alright with me.  Oh Heck Yes, just bring it.  Delivery guys show up, tell me there are scratches on this one. OMG, just note it on the delivery sheet and install that sucker!  They take out the old frig, install the new frig, turn it on and that thing is cold like right now!  Yippy! 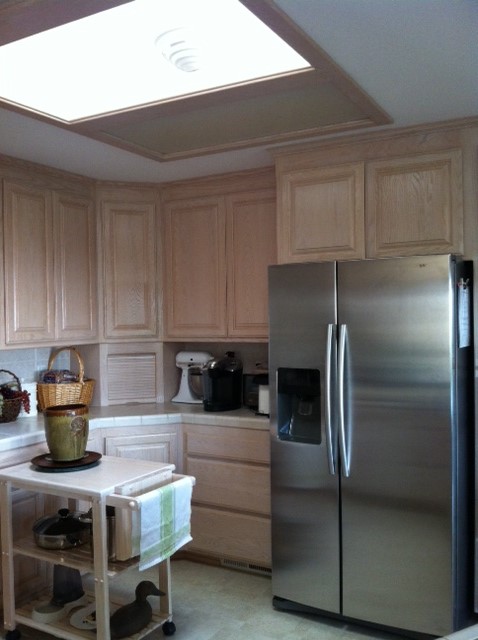 They test the water dispenser... no water...  ok, all three of us trouble shoot that, hookups are fine. I open the the door look in and point out that it has no water filter. They say the water dispenser won't work without the water filter. And they have to leave. Alrighty, I go back to HD, get credit for the scratches, get a water filter and the two missing shelves, and come home and install them myself. Still no water, which at this point I'm good with as the essentials are chilling nicely... 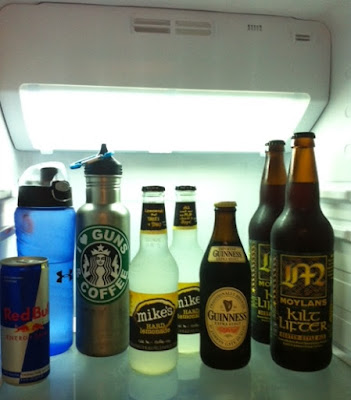 The manufacturer is sending a repair man in a week to fix the water dispenser.  I'm back on schedule for Dad's daily milkshake, my brother's inheritance has been spent, and the resupply of essentials is on going. We're good...
Posted by Brig at 9:11 AM