Took Marymine's & granddaughter Ali's GPSs back to them Thursday. I kinda look for any reason to touch base with my kids & grands.  Ali was at work, so I didn't get to see her. She is working as a pest fieldman during summer break from college.

Lauren was home, on the mend from a nasty bug she got flying home from USA volleyball camp in Michigan. 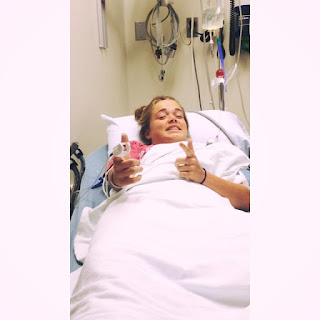 She's all better now, but it was a really crappy few days for her, and Marymine.

By way of thanks for letting me borrow the GPSs for Dad's trip, I got the girls a big travel bag.  They fly around the country a lot, and like plain ol country western stuff...

While I was there I got to go for a ride in Marymine's second New pickup.  She called me when she got the first New one a month ago. First truly New vehicle she has ever had. It had everything she wanted, in the color she wanted, leather seats, crew cab, etc.  When I called her a week later to check in, she was not a happy camper.  She had taken it back to the dealer to get the leather seats treated.  They called her the next day, there was a little problem, they had wrecked her pickup driving it from one service building to another.  They would just put it in their shop and fix it.  And then the fight began! Suffice it to say, she pretty much went through a lot getting them to either give her another new pickup, or refund her money.  They finally decided that they would refund her money.  She went to another dealer, and found an even better deal on her second New pickup.  It is very cool, and she loves it. So all is well there.
Boy have pickups changed since the last one I bought. All those bells & whistles and the price!