Dad's been mope'n lately, I know why, and I can't fix that, but I can give him another venue, mountain air.

Sunday, I told him to get his fish'n pole, and Willy and Load Up!  He hemmed and hawed for about a minute, and then was yelling for me to get a move on. Hey, who's great idea was this anyway!
We made a big loop, going to the N entrance to Lassen Volcanic Park.

Whipped out the trusty senior pass and we were in. I then drove to the south end of Manzanita Lake.
After unloading his gear, I parked Dad & his walker by the water so he could fish. 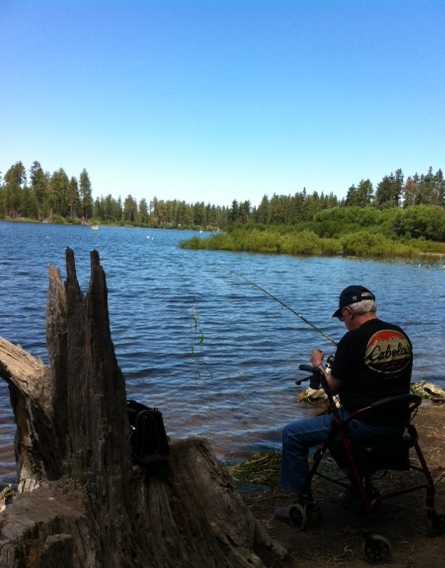 He was way out of practice with his casting, there by being of some danger to anything in the general vicinity. There weren't too many other people around, and the ones that were hastened to keep their distance.  Willy sat under Dad's chair and shook, as I waded out to untangle the lure, again, and again.  He caught: four logs, a large stump, one pine tree, two pine cones, three water plants, and me. Another day fish'n with Dad... But dang if he didn't have a smile on his face. When the wind got too brisk for him, we loaded up, and headed on through the park.

It is beautiful in the high country... I told Dad I would love to come up here kayaking & camping. He said, "Well, if you had a boyfriend you could. Which you would have, if you weren't so darn picky!"  He's plotting again...

As we were driving through the park, I asked Dad what a certain shrub was. He didn't know, but he said my grandpa would have been able to tell me what every tree, plant, rock, and critter was... It seems he was a voracious reader with a photographic memory as well as a consummate outdoorsman.
After touring the park we drove into Chester for a bite to eat, checked on what was on the flight line at the airport, and then headed down the mountain to home. Dad was in a much better mood after 200 miles of mountain air... well that, and his SF Giants Won.