TBT way back when...

Sorting through boxes of pictures, putting dates and places on the backs of the ones not marked. Dad and I have done this for his pictures, I'm still working on mine.

I found one that had been posted on a bulletin board for some family event, possibly my late mother and father-in-laws 60th anniversary party.  When the person that took down the pictures put my pictures in a baggie for me, they didn't take the tape off the back of the photos, unbeknownst to me. While sorting I pulled them apart, and thought I had ruined one of my favorite photos of the Cowman and Marymine.

Scouted around and found a place that restores photos.  They said they could fix it!  I picked it up the other day. 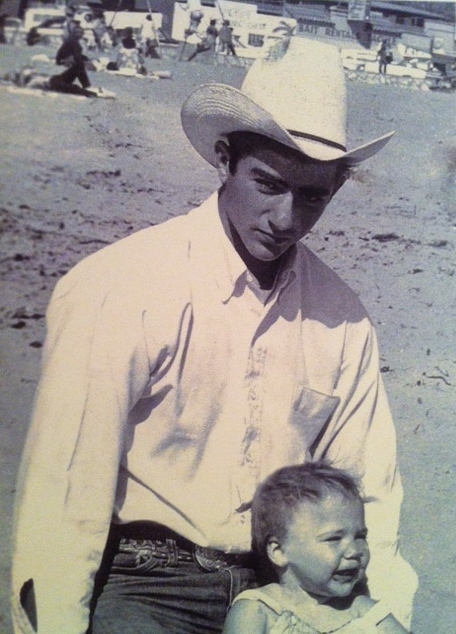 A bit of the story behind the picture...
The young Cowman wanted to go back to college and finish his degree. We saved up, loaded up Marymine, and headed down to Cal Poly SLO. While I worked full time, the Cowman worked between classes. We bought a beat to heck ol White delivery truck, and hauled hay at night, with Marymine sleeping beside me.
We loved the beaches and the ocean, so every chance we got we went. I think this picture was taken at Pismo Beach, or less likely Avila.
Yes, this was considered casual beach wear to the Cowman. He really didn't like shirts and Wranglers that were not pressed. Marymine didn't care what he wore as long as he was close.

Ah, being young and a lot in love, it was all way more fun than it should have been, way back when...
Posted by Brig at 9:49 AM