It's going to be another hot one today, weather guesser says 114.
Found a yard service that will prune down the long hedges, for less money than the others quoted. They came by recommendation from a neighbor that is very particular about her landscaping. Hopeful they will get it done in the next week or so.

Up at 4:30AM to watch the sunrise over the Sierras.


Then off to the airport cafe for an early breakfast gathering with my neighbors.

With a very full belly, I went on to my dentist appt for a filling.  I have been experimenting with mindfully lowering my blood pressure for a while now, but can't quite get to the point where I can do it consistently. (I had read that monks can do this consistently, although they don't live in this stressful environment.) Part of it is that I don't take my BP, so the only time I get the numbers are at the blood bank, doctors, dentist, etc. I don't have high BP, and don't take any meds for anything, just wanted to see if I could mindfully make it change.  This morning as I'm waiting for my dentist to drill'n fill, I concentrated on lowering my BP about five minutes before she went to work on my tooth.  I got it down to 95/58, which works for me.

My little Sally Holmes rose start has recovered from my stupidity. Right after I transplanted it into a pot it got infested with aphids. Instead of just squirting them off with water, I sprayed it with an old aphid spray that had been in the garage for only God knows how long.  The poor thing's leaves started to curl immediately.  Quickly washed as much off as possible, which didn't help much as the spray had an oil base.  Treated it to intensive care for a couple weeks, and  watched it continue to decline... It's a cutting from a Sally Holmes that lives at an abandoned homestead near the coast, so I really didn't want to lose it.  This last week it has rallied and even bloomed.  A tough little rose. 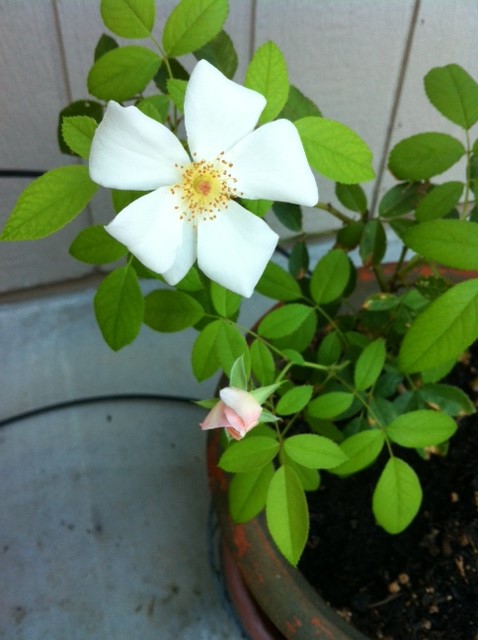