Two of the ranches we lived on had wild hogs. 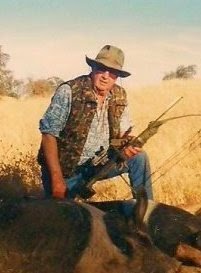 One of those, the SV Ranch, had a lot of them, and the hogs were about as mean as they come. 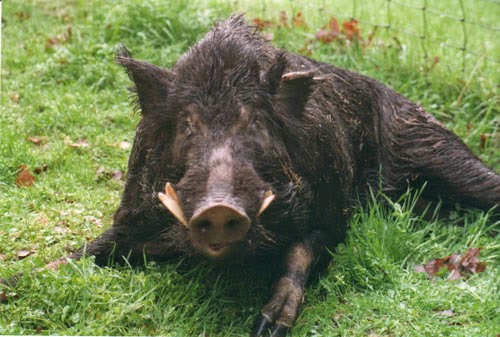 not my pic, but just like the SV wild hogs

Years before a neighboring rancher had brought in some Russian boars and they "accidentally" broke out of the pens.  Hogs can go feral pretty darn quick and those boars did a bang up job of over populating the countryside. I'm sure the rancher that brought them thought wild hog hunts would help supplement his bottom line. But those damn hogs did way more dollar damage than was ever made by selling hunts. They tore up pastures, destroyed watering holes, ripped out fences, and killed fawns, lambs, and the occasional calf with abandon.
The Cowman was checking cattle a horseback one day, on a small oak flat up in the hills, when out of a grease wood thicket came an ol tusker. He charged the horse the Cowman was on. In the melee that ensued, the ol tusker slashed open high inside of the right hind leg of the Cowman's horse. The Cowman managed to get his saddle gun out and put a kill shot in the ol tusker.  He then ripped both sleeves off his shirt to bandage and tourniquet his horse.  After getting him bandaged he lead his horse off the mountain to home. It was the only way, if he had left him to go get a trailer, the horse would most likely have bled out before he could get back to him.
The horse healed up after a long course of home doctoring.  I had to do some deep tissue cleaning and suturing on that cow horse. It never bothered me to stitch up a cow, but I hated having to do it to a horse.  They are so different in hide type, with cowhide you can be a crappy stitcher and get away with it, with horses fine sutures are called for.
The guys took a four wheeler up the mountain and cut the tusks out of the stinky ol boar. The Cowman showed the kids how the tusks worked to slice and dice. Included was a lesson on how you always needed to be packing, don't be caught out alone a foot, and where to aim so you got a fast kill, because your wellbeing  or your horse's could depend on it.
Between the rattlesnakes, (I killed 29 in my yard alone the last summer we lived there) and the wild hogs it was not my favorite ranch. There must have been a few redeeming features to that place, but they have been lost to my memory.
Posted by Brig at 10:20 PM